Beja Unit Two Built and Based 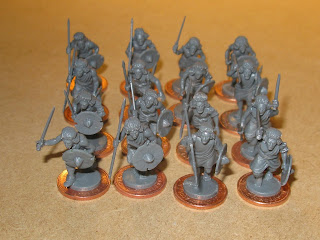 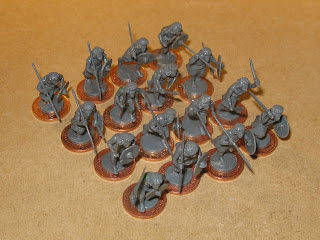 I have now assembled the second of four units of Beja loonies for my The Men Who Would Be Kings, Death in the Dark Continent mash up project. I've enjoyed making these and have been playing around with all the various combinations of arms and weapons, so they are all fairly different despite being based on only ten bodies. I've included a few figures in jibbeh to add some variety but also to stretch the box set as far as possible, even though they were the exception rather than the rule.

I've also not included any rifle armed figures, as I have a couple of the metal box sets that I'm going to use for a unit of skirmishers for Death in the Dark Continent, which can also be sprinkled into the sixteen man units for The Men Who Would be Kings. I've realised that I need another box set of the plastic figures if I'm not going to use most of the jibbeh clad ones, so I've ordered one from eBay. In the meantime, I need to texture the bases and undercoat the ones I've just finished, before tackling unit number three!
Posted by Jim Jackaman at 10:41

Labels: Death in the Dark Continent, The Men Who Would Be Kings