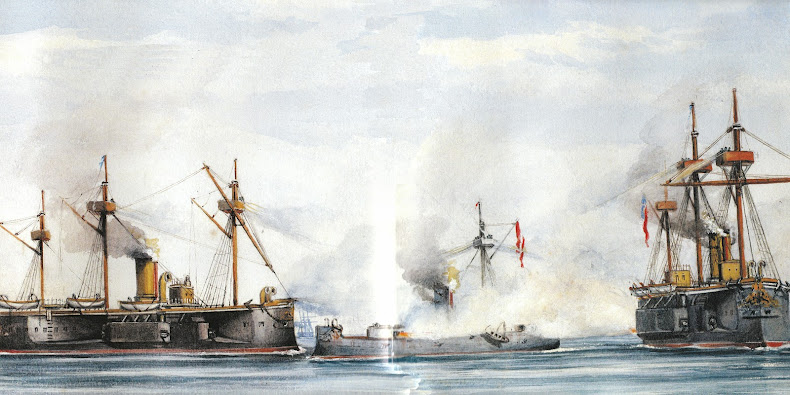 I finished off the half a dozen or so 1/2400th scale ships for the Peruvian and Chilean fleets today, so have now pretty much completed the War of the Pacific project. I could add some gunboats and torpedo boats for both sides and the corvette Esmerelda for the Chilean navy, but I think I have more than enough ships for the major engagements of the war, although major is a bit of an exaggeration. I'm particularly pleased with the way the heavily converted Independencia came out, as it was a bit of a long shot to say the least. The plan now is to run some historical and some 'What If?' scenarios using Dahlgren and Columbiad, with an eventual solo campaign a distinct possibility at some point next year?
Posted by Jim Jackaman at 08:53 No comments: 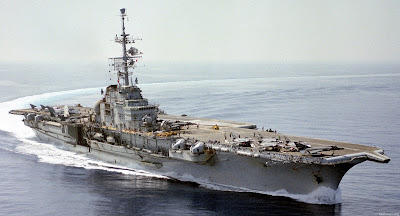 I had a very apologetic email from Navy Models and Books yesterday to tell me that the moulds for the French frigates in their modern range have been retired, with the result being a major gap in my taskforce escort contingent. To solve the problem, I've turned to Navwar and have ordered the missing ship models from them instead, along with a Soviet fleet pack to provide the opposition.

I think  I would have been better off sticking with Navwar in the first place, although I've never had a problem with Davco when they were part of the Skytrex range. I've also ordered some 1/600th scale F8 Crusaders and a Breguet Atlantic from Tumbling Dice, so my air wing will have some CAP cover and an early warning capability. Bof!

Posted by Jim Jackaman at 11:24 No comments: 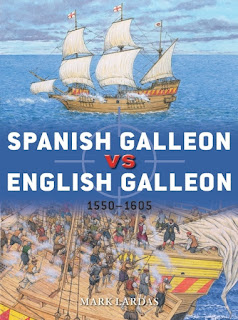 This was a pre-order a few weeks ago and it popped up just as I was thinking of doing some reading in preparation for a potential project next year. It's a typical Osprey, in that it's quite brief and to the point, but Mr Lardas clearly knows his stuff and the illustrations are excellent. Very good!

Posted by Jim Jackaman at 11:04 No comments:

Save the Royal Navy

This is well worth a look as, although there are some axes being sharpened in the background on behalf of the Senior Service, there's a lot of really relevant and well-informed commentary about the Royal Navy in the current economic, political and strategic context. From a wargaming perspective it is definitely relevant if you have an interest in modern and even near future developments in naval power projection, technology and strategic thinking. Here's the link:
https://www.savetheroyalnavy.org/
Posted by Jim Jackaman at 10:01 No comments: 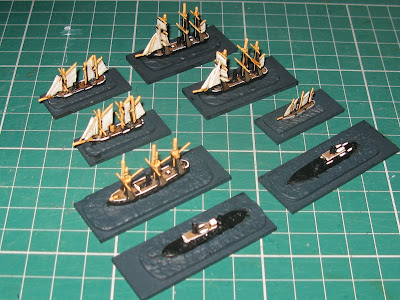 It's been slow going but I have almost completed the highlights and detailing on the 1/2400th scale Peruvian and Chilean ships for the War of the Pacific project. I think I will add a wash of GW Seraphim Sepia ink to the masts before I start on the bases but that's about all I need to do. I have had less time to spend on these over the week due to work but will aim to finish them this weekend, so that I can move onto the Cold War 1/3000th scale project. The 1980's French ships haven't arrived in the post yet, so I am going to go back to my mid-1960's 'What If' Indonesian Confrontation naval project, with either the Indonesian fleet or a Royal Navy East of Suez carrier battlegroup as my first port of call. I'm looking forward to it!
Posted by Jim Jackaman at 08:36 No comments: 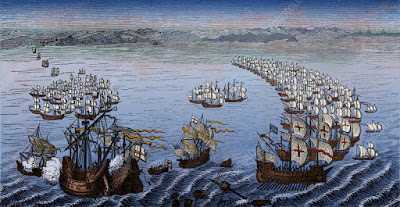 I'm thinking about which Age of Sail project to include in my plans for next year, one of which would be to have a go some 1/2400th Spanish and English ships for Elizabethan naval wargaming, with an emphasis on small, skirmish level actions rather than fleet sized Spanish Armada scale engagements. It's just a sketchy idea at the moment, as I already have the Napoleonic fleets to complete, but I quite like the sound of it. I'm doing some background reading now, so that I can work out what I'd need to do to make it a solid project.
Posted by Jim Jackaman at 15:06 No comments: 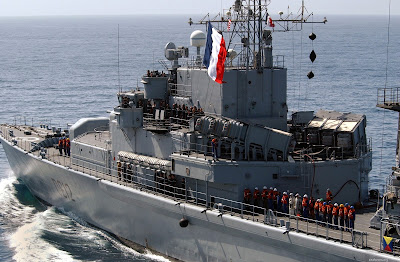 Here's my proposed line up for the early 1980's Cold War French naval battle group, which can either be for carrier escort based on the Foch or an amphibious / anti-submarine warfare task force using Jeanne d'Arc as the key element;
FOCH [CV]

I have enough models to swap things around a bit, for example, including a second Tourville class frigate or three Georges Leygues class frigates, depending on the scenario and mission profile. A few things I haven't got are a dedicated amphibious ship, a fleet replenishment ship or fleet tanker, but I'm going to have a look at the Navwar modern range to fill the gaps. The aircraft and helicopters will be from Tumbling Dice in 1/600th scale, as I already have a few in my project pile and they are ideal for use with 1/3000th scale ships. Bof!
Posted by Jim Jackaman at 06:02 4 comments: 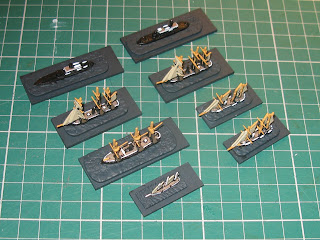 I finally got round to blocking in the 1/2400th scale Peruvian and Chilean ironclads that have been sitting on my workbench for a couple of weeks, with all of the base shades now applied ready for an overall wash in my usual mix of brown inks. I'm going to aim to get them finished off over the next couple of days and squeeze in the Battle of Angamos game as well, which I had to postpone today due to competition for the kitchen table, with the wife and daughter grabbing the furniture for their online art class before I even got a look in. Typical.
Posted by Jim Jackaman at 12:01 No comments: 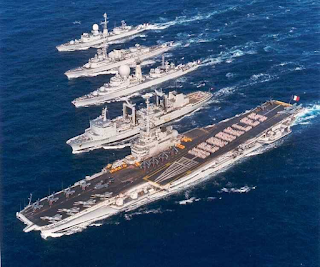 One of my proposed projects for next year is to have a go at Cold War naval wargaming, which is usually seem as being a bit complicated and less than tub thumpingly exciting, perhaps due to the complexity of most modern naval rules. I've chosen Rory Crabb's Naval Command as the ruleset to deploy, as it seems to be a bit less mind bending than some other rules options and also covers pretty much all of the aspects of modern naval warfare that you would expect including maritime strike and surveillance, submarine and anti-submarine warfare and amphibious landings.
https://rorycrabb.wordpress.com/2018/07/11/naval-command-new-edition/
On a slightly different tack from the usual RN or USN option, I've decided to start with a 1980's French carrier battlegroup built around the aircraft carrier Foch with an escort of anti-aircraft destroyers, ASW destroyers and frigates and an attack submarine. I'm using Davco 1/3000th scale models rather than Navwar this time, as the castings are better even if the range available is more limited. I'm going to start this project early next year and will be adding a Soviet battlegroup to match, once I've cleared the decks of my current ironclad projects.
Posted by Jim Jackaman at 11:42 No comments: 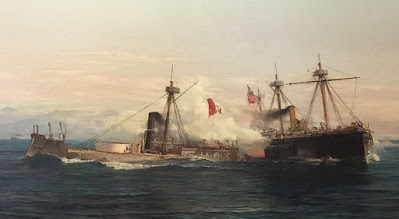 I've been at work but also under the weather health wise over the last few days, so there has been a bit of a hiatus in wargaming related fun that I'm hoping to resolve this weekend. The plan is to run the Dahlgren and Columbiad scenario for the Battle of Angamos that I worked out a few days ago, with the ship record sheets now filled in ready for action. It will be interesting to see how the Huascar manages against the two Chilean broadside ironclads, or at least for how long she manages to stay afloat. In the scenario, if the Chileans do sink or severely cripple the Huascar they will lose anyway, so they will have to try to win without inflicting too much damage. Thus far, all of the games I've played using the rules have given a fairly historical outcome but who knows what will happen this time round?
Posted by Jim Jackaman at 05:29 No comments: