Jasmund 1864 - A scenario for Broadside and Ram 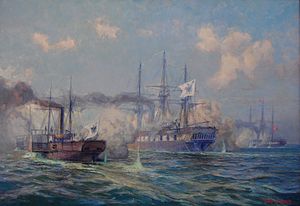 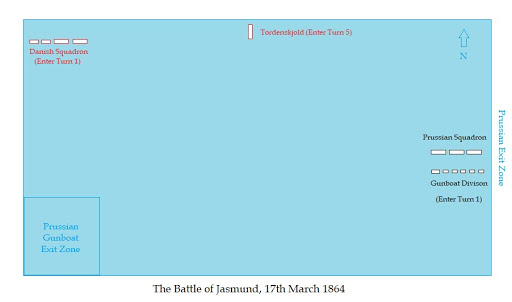 The scenario itself is based on the action fought on the 17th March 1864 off the island of Rugen between the Prussian squadron under Kapitan zur See Von Jachmann and the Danish blockading squadron under Rear Admiral Von Dockum. The scenario has a time limit of nine turns, beginning at 13.00 hours and finishing with the last turn at 17.00 hours, allowing for a timeframe of 30 minutes per turn. The game should ideally be played on a 3' x 4' rectangular table rather than the usual 4' x 4' square area.
The Prussian Squadron
At the start of the scenario, the Prussian squadron is divided into two separate columns, the first consisting of the screw corvette Arcona (flag), the screw corvette Nymphe and the paddler Loreley, with the second consisting of the 1st class gunboat Comet and five 2nd class gunboats - the Hay, Hyane, Pfeil, Skorpion and Wespe. The gunboat squadron commander, Kapitan zur See Kuhn, had already been ordered by Von Jachmann to join up with the Arcona and Nymphe, so at the start of the game the Loreley is last in line in the northern column rather than being at the head of the gunboat squadron.
The Prussians enter from the centre of the Eastern short edge of the table in two parallel lines in Turn 1.
The Prussian commander, Von Jachmann, has a command rating of -1 due to his failure to communicate his orders by signal or follow his own plan of action during the battle, which led to the effective tactical defeat of the Prussian squadron. As a counterfactual 'what if?' the Loreley may be detached from the Arcona and Nymphe from Turn 1 to re-formate with the 1st gunboat division, giving Kuhn sub-command of the gunboat squadron. Kuhn is rated as +0 for command purposes and will assume overall command if Von Jachmann is killed or the Arcona is shattered and sunk.
The Danish Squadron
The experienced Danish commander, Van Dockum, proved to be a more effective and tactically astute in action than Von Jachmann, so is rated as a +0. The Danish squadron consists of the screw frigate Sjaelland (flag), the screw ship of the line Skjold and the two screw corvettes, Thor and Hejmdal.
The Danish enter from the North Western corner of the table in line astern on Turn 1.
On Turn 5 the screw frigate Tordenskjold will enter from the centre of the Northern side of the table, initially as an independent command but under orders to join the rest of the Danish squadron as soon as possible.
The Prussian Objectives
The Prussian strategic objective is to test the resilience and strength of the Danish naval blockading force, by executing a 'tip and run' armed reconnaissance, ideally without losing any ships in the process. To satisfy the honour of the Prussian Navy, it is imperative that some damage is inflicted on the Danish squadron before any tactical withdrawal.
The objective of the Prussian commander is, therefore, to inflict a Damaged result on at least two enemy ships, then to escape with minimal loss to the Prussian squadron. To escape, the Prussian ships must move off the Eastern edge of the table by the end of the scenario. The gunboats and the Loreley may also exit via the 8'' square South Western Exit Zone, as an alternative escape route but this is not available for the other larger Prussian warships.
If two Danish ships are damaged and all Prussian ships escape, the Prussians win a major victory. If two Danish ships are damaged but Prussian ships are also Damaged by the end of the game, the Prussians win a minor victory. However, if any of the Prussian ships are Silenced, Crippled or Shattered at the end of the game the Prussians suffer a minor defeat. Finally, if the Prussians fail to inflict at least two Damaged results on the Danish squadron they will suffer a major defeat, even if they all escape to fight another day.
The Prussian first and second class gunboats do not count as ships for the purposes of the victory objectives and may be effectively regarded as expendable.
The Danish Objectives
The Danes, by contrast, have a very simple objective, which is to Cripple or Shatter the Arcona, and Nymphe by the end of the game.
If the Arcona or Nymphe are Crippled or Shattered, the Danes win a minor victory. If the Arcona and Nymphe are both Crippled or Shattered the Danes win a major victory. The Prussian gunboats and the Loreley do not count for the purposes of the Danish victory objectives and may be effectively ignored by the Danes, until and unless they open fire on Danish warships.
However, if the Arcona and/or Nymphe escape with no more than Damage, the Danes will suffer a minor defeat. If they both escape undamaged and one or more of the Danish ships are Damaged, the Danes will suffer a major defeat, even if they in turn manage to Damage, Silence, Cripple or Shatter some of the gunboats or the Loreley.
Both sides may be able to claim a victory but the side with the better claim wins. If the result isn't clear cut, then the mechanism in the rules can be used to determine the winner.
Posted by Jim Jackaman at 10:10