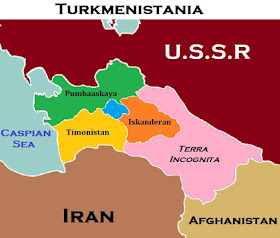 The other day, I asked fellow gamer and all round nice chap Colin if I could join an imaginations project that he announced over on his excellent Down Amongst the Lead Men blog. This was inspired by the equally excellent Hakuna Matata Wars blog by Just Jack, which we had both been following over the summer. This involves two fictitious African nations, Hakuna and Matata, in an on-going conflict on land and in the air.

Colin's idea was to follow Jack's example but to set his imaginary Cold War era conflict in the Middle East, somewhere in the general direction of what is now Turkmenistan. The three nations involved in this campaign, which is set around 1960, are aligned with the UK, USSR and USA. Colin has created a separate blog to chart the progress of the conflict and to develop the background to Pumbaaskaya, Timonistan and my own nation state, Iskanderan.

It's all very early days at the moment and we're both in the stages of assembling our respective 3mm armies and 1/600th scale air forces, but I'm sure there will be regular updates on the blog to explain more about what we're up to. I'm waiting for my 3mm early 50's US equipment to arrive in the post and, in the meantime have been devising the key elements of Iskanderan's government, economy, society and military capabilities using the very handy Fivecore nation generator tool Not Just a Brush War.

I'll keep you posted or you can check out Colin's imaginations campaign blog here: