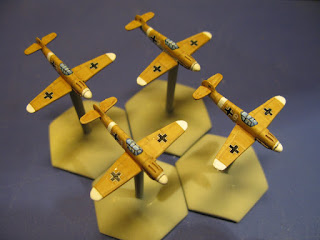 I set about re-jigging the Special Delivery scenario yesterday with the aim to increase the Italian fighter complement from six to nine aircraft in three sections of three planes each. This meant identifying named pilots of 73 Squadriglia for each of the aircraft. To do this I dipped into a new book that I didn't have when I originally wrote the scenario, Brian Cull's Fighters over Malta, only to find that two of the original pilots had already been KIA by the date of the scenario! 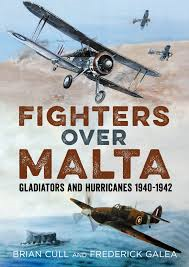 After I read a little more I also discovered that 73 Squadriglia actually left Sicily in December to re-equip with new Mc202's, although they were around on the 22nd to support an attack on Grand Harbour. While I do now have enough pilots identified for the scenario including replacements for the two shot down, Capitano Pluda and Tentente Bonfatti, I started to think that I could change the set up to a different configuration.

It just so happens that the Luftwaffe had deployed Jagdgeschwader 53 to Sicily at the beginning of the month, both to take over from the less than effective Regia Aeronautica but also to free up the Italian 9 Gruppo for deployment to North Africa. The first action involving JG53 was a 'Free Chase' by the Stabsschwarm of JG53 led by Major Gunther von Maltzahn on the 19th Decemeber. 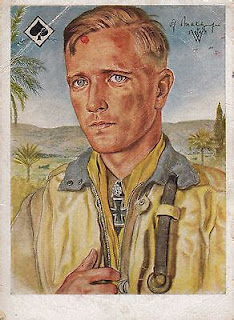 I just happen to have four Bf-109F's painted, although not in Stab markings, which would be perfect for this role and which I could feasibly use to engage the Blenheims on the 14th December, only five days earlier. Here's a contemporary  newsreel of Major Von Maltzahn shooting down Hurricanes over Malta only a few weeks later:

This would change the balance of the game and reduce the numbers on the Axis side rather than increasing them as originally intended. However, I could balance this by allocating Top Ace status to Major von Maltzahn and include Veterans in the rest of the Stabschwarm, using pilots that I have been able to identify from subsequent action reports:

This would be an interesting challenge for both the RAF and for the Luftwaffe, although I'd make life easier for both by allowing the aircraft to operate in pairs rather than having to conform to four aircraft formations. I'd still have two sections for No.185 Squadron but one of these would not enter the air space until further into the game, once the cannon armed Bf-109's had started to chew up the bombers.

It's just an idea at the moment but I'll give it some more thought.