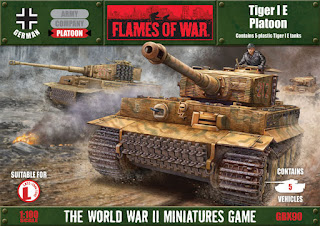 One of my as yet undone 'to do' projects over the last couple of years has been a 15mm US army for I Ain't Been Shot Mum, for which I have been collecting Plastic Soldier Company and Battlefront figures and AFV's. I have now got a sizeable pile of kit for this, with the infantry in winter gear for late 1944 and early 1945. The idea is to use my '6 x 4' tundra terrain cloth as a basis for the scenic side of the project, so it made sense to go for the Reichswald or Ardennes rather than Normandy. When I get round to this is another matter entirely, having originally intended to get it underway in 2018, but at least I'll be sorted when I eventually do!

I have, as yet, only got one plastic Jagdpanther for the other lot, however, so I thought I'd start collecting a few more bits and pieces to build a late war German Kampfgruppe. I was really pleased to find that NorthStar were flogging off a Battlefront Flames of War Tiger platoon box set of five plastic tanks, at a 50% discount and a price tag of only £13. I thought this was a really good deal, especially when I got the boxed set today and discovered it included some extra cards for Tanks!, as well as some super decals and other goodies.

That's a Panzer Zug ready to assemble for a start....Panzers Marsch!
Posted by Jim Jackaman at 11:40