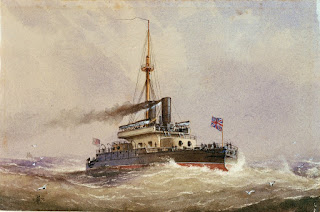 The hunt for extra ironclads for the Royal Navy squadron continues, with the discovery of a Tumbling Dice 1/2400th scale model of HMS Devastation in the bottom of the 'I'll get round to that one day' box. It's just a little bit late for my timeframe of 1865 to 1875 but it was in service, so I'll have one thank you very much. I'm sure it will give the Frogs the fear, which is always a good idea and probably what she was designed for in the first place!

It's also a very simple casting to paint up, consisting as it does of the hull and base, with no nasty masts or sails to tackle. I have also found a single casting of the steam frigate HMS Shah which I may or may not build as well, even though it's definitely pushing the limit of what I can justify. On the downside, I've been really busy at work, so have had no time in the evenings to start on the French ironclads, but I will be sorting that out at the weekend, decorating and DIY permitted.
Posted by Jim Jackaman at 13:07