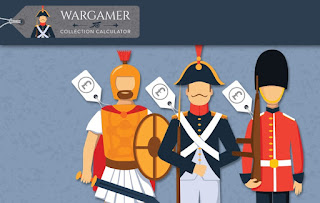 I found this today and thought I'd have a go at creating an archive of all my wargaming stuff, starting with the painted things. I gave up. It wanted me to itemise everything unit by unit, which would take ages, and I haven't even touched on the unpainted lead pile which is enormous. In fact, the original idea was to itemise all of that so I could find a way to sell it off, at least the three quarters of it that I will never, ever get round to painting.

I'm going to have to do something with it, as it's now at a critical mass of lead and plastic, which means that I have run out of space to shove things on top. It's also a bit depressing, as it means that I have too many choices which, combined with my feeble willpower, means that nothing gets seen through to completion. A couple of years ago I contacted a trader who buys unwanted wargame stuff, drew up a list and asked him to value it, but the offer he came back with was so far off the mark that I said no.

The alternative would be to put it on eBay or sell it item by item via the Wargames Website, but to list it all would take ages let alone wrapping it all up and carting it down to the post office. I think I should bundle it up into army sized collections and sell it off in bulk, as that's the only way I'll shift it! The idea would be to radically cut back to focus just on naval and air wargaming, with a sideline of skirmish gaming using small numbers of figures, selling off virtually all of my 'big' armies in lead and plastic.

It will be really painful but worth it for my mental health and bank balance!
Posted by Jim Jackaman at 01:40