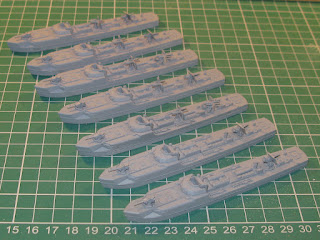 I woke up this morning and decided on the spur of the moment to tackle the Cruel Seas plastic S Boats that I had intended to build and paint a few months ago but never got round to. The first job was to do another cut and shut conversion to make a second S-38b class boat with an armoured cupola. I had made one of these before so it was a relatively quick and painless task, cutting two hulls in half and then gluing them together. There were two in the 5th Flotilla, so it just had to be done.

After that it was down to the fiddly business of building the various weapons mountings, which are not very accurate and are not really in the right combination to equip either the S-100 or the S-38, let alone my ad-hoc S-38b's. The big omission is a 40mm Bofors mounting, so I just used the 38mm Flak cannon as a substitute on the S-38b's. I may go back and replace these with a proper Bofors, if I can.

I also had to use one more quad Flakvierling mount on the S-100's than I would have liked as they were really quite unusual. It seems bonkers to have a quad flak gun on each sprue when they weren't a conventional armament, at the expense of a far more common 40mm Bofors gun. The 20mm cannon for the bow gun tub is also a ridiculously over scale thing and makes the other weapons look a bit like proverbial peashooters.

Anyway, I'll get some paint on these tomorrow if I have the time.
Posted by Jim Jackaman at 13:39