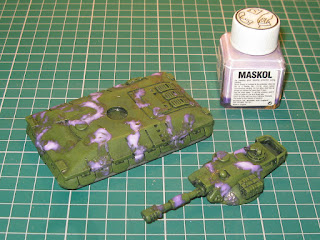 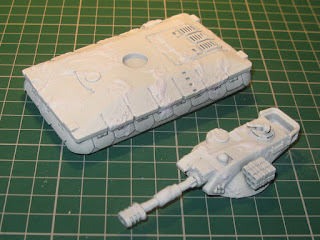 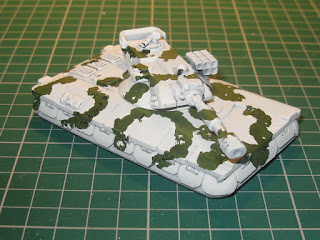 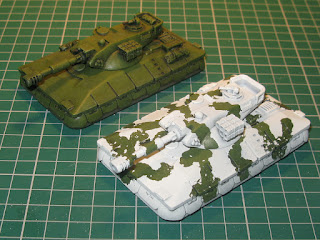 I've been tinkering off on a tangent again this evening, with some experimental masking using liquid Maskol to create camouflage patterns, in this case on one of my mothballed Brigade Models 15mm Sci Fi hover tanks. The tank in question was originally destined for warmer climes but, as I'm capitalising on my nice winter terrain cloth, I thought I might send the entire force packing to some ice bound battlefield of the not so distant future.

I wasn't happy with the stage that I'd reached with the armour, which was an old fashioned three stage drybrush in green, so some arctic camo seemed like a good idea. The end result isn't too bad and I quite like the flaked paint effect, which reminds me of NATO exercises in Norway. I think I'll do the same with the rest of the AFV's and power armour figures, but I will now need to paint some dedicated arctic warfare infantry to replace the ones that were originally going to equip the force.
Posted by Jim Jackaman at 11:46