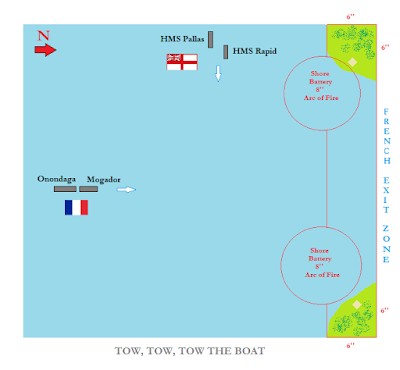 Here's the scenario outline for my INWARD 2019 Broadside and Ram naval game, set in an early 1870's counterfactual Anglo-French conflict. The newly commissioned turret ironclad, Onondaga, has been conducting sea trials off the coast of Toulon but has suffered an internal explosion, with steam power to the engines stopped and no movement possible. The engineers have been working hard to restore power, not only to the propulsion system but also to the steam operated turrets, which are trained fore and aft but unable to turn. However, the paddle frigate Mogador has been dispatched to tow the Onondaga into a nearby bay, where it can be under the protection of coastal gun batteries. 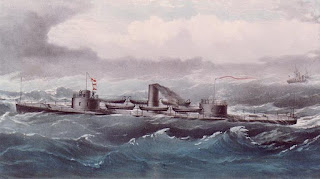 The Onondaga and Mogador are connected by a towing cable and start the game at the mid point of the southern table edge. The Onondaga has no power so must be towed by the Mogador across the table to the opposite edge at 2'' per turn at no AP cost. An additional 1AP may be spent each turn to double this to 4'' at 'full steam ahead' but this may cause the tow rope to part (roll 1D6, 5-6 = tow broken). The Mogador may voluntarily slip the tow at a cost of 1 AP and will then act as independent.  The Mogador may turn 'on the spot'  if stationary at the cost of 1 AP during the turn phase but only if not towing.

The Onondaga has to repair its steam lines to traverse her turrets, although she may fire fore and/or aft at -2 AF without doing any repairs. The repairs take three turns at a cost of 3AP, 2AP ad 1AP to complete. The repair cost in AP's does not have to be spent in consecutive turns. This cost is additional to any other repairs that the Onondaga may be required to make as a result of damage. The Onondaga cannot regain any movement by these repairs and remains stationary if not under tow. To add some additional realism, the Onondaga may be allowed to drift at 2'' per turn toward the eastern edge of the table if not under tow. 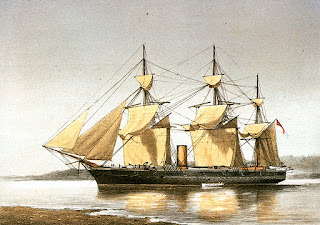 The Royal Navy flotilla of HMS Pallas and HMS Rapid enters from the mid-point of the western edge of the table in echelon formation.  They may operate independently or change formation as desired. They may target either or both the Onondaga or Mogador as separate targets while they are in tow. The tow may be cut voluntarily or if either ship suffers damage, in which case the two ships must be targeted as separate vessels. The objective of the Royal Navy is to cripple or shatter the Onondaga before the Mogador can tow it under the guns of the coastal batteries. To do this, they may attempt to silence, cripple or shatter the Mogador first, before attacking the Onondaga. 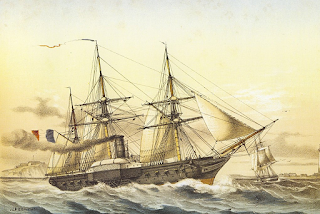 The shore batteries have a range of 8'' in a 180 degree arc of fire, with a DF of 2, although they cannot be fired on by any ships as they are in an elevated position on the cliff tops. There is an area of shoals at the base of the cliffs extending for 6'' parallel to the shore line. Any ship that enters this area automatically runs aground and is considered to be shattered. The range of the gun batteries and the presence of the shoals may not be revealed to the Royal Navy if desired but should be revealed to the French. The French must tow the Onondaga into the 6'' exit zone at the northern end of the table in anything other than a crippled or shattered condition to achieve a victory. This may also be achieved by reducing both of the enemy ships to a crippled or shattered condition.