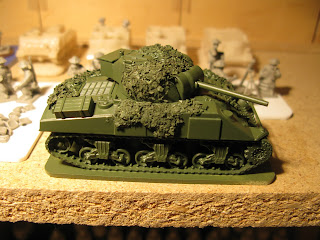 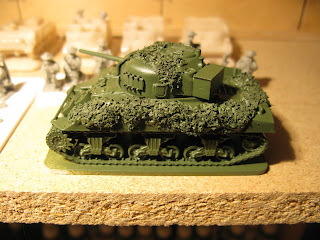 Here's the result of my attempt to add a bit of texture to the green stuff netting that I applied to the Sherman yesterday. As you can see, I blobbed some PVA onto the green stuff then dabbed on some old cooking herbs to create a vague approximation of scrim and foliage.
I'm pretty sure it was oregano, although the label had fallen off the jar, so I might be mistaken. It smelled nice anyway. I think I overdid it a bit as there's not a lot of the netting visible. However, it does capture the sort of look that I was after and was very simple to do.
After it had all dried out I sprayed the whole tank in Humbrol Matt Light Olive 86, both to seal it and to provide a basecoat for washing and drybrushing. Before I tackle any more painting I'll assemble the other Sherman III's and the Fireflys, so that I have them all ready to undercoat in one go.
Posted by Jim Jackaman at 12:55