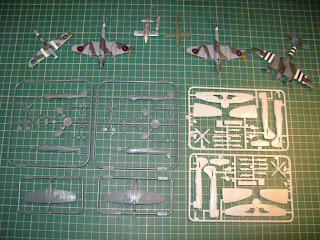 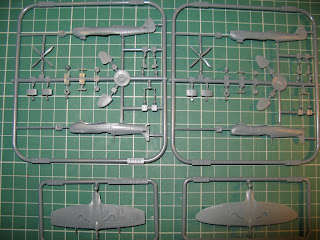 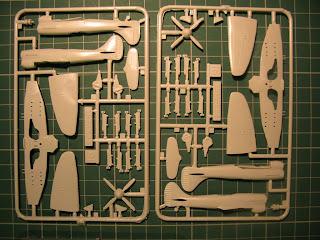 It's been a bit quiet on the doodlebug front recently but I've been quietly accumulating the pre-painted and kit model aircraft that I'll be using for the participation style game. The Meteors and the Mustang are plastic F-Toys pre-paints, while the DH Mosquito is a not quite in scale diecast from the Corgi range. They all need some work to improve the finish but that's what you get when a robot does the painting.

The Tempest kits are from Revell and the Spitfire IX's are a dual combo kit from Eduard (yes, they did shoot down some V1's). The strange metal object is a V1 from Pendraken, which is not too bad until you put it next to a scale V1 from F-Toys. I reckon I could do some cut and shut modifications to make them more accurate, or just get hold of a second (expensive) pre-painted model.

This is it for now, unless I find some cheap P47's, so I'm concentrating on the coastal warfare project in the interim. However, I have a demo game of Bag The Doodlebug at the club on Tuesday as a warm up for the main Bag The Hun game. We'll see what the players make of it and, hopefully, I'll get some feedback on the mechanics of the actual participation game, whenever its gets off the ground.
Posted by Jim Jackaman at 11:45