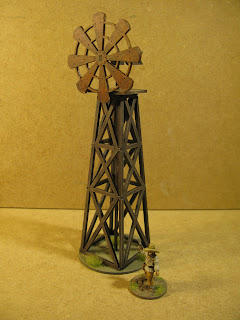 I'm adding little extras to the project at the moment, the latest being a very nice kit of a wind pump from Blotz. I originally bought a Sarissa Precision wind pump kit but it was so big it looked overscale to me and will now be re-purposed as an oil derrick for the Back of Beyond. The Blotz version is about two thirds of the height and has a much more realistic scale windmill on the top, although it was a bit of a pain to assemble due to some very tight fitting components. 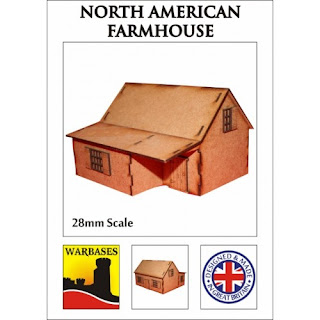 I've also ordered some assorted bits and bobs from Warbases in an attempt to make my own railroad depot building rather than the expensive and large Sarissa Precision model kit. The idea is to use the Warbases North American farmhouse, together with some extensions using the barn lean to pack and the modular single storey building, to create a railroad station office and goods shed. I'll also scratch build a platform from coffee stirrers and strip wood which will act as a wrap around base for the building itself.
I don't know if it'll work but it should be fun having a go!
Posted by Jim Jackaman at 12:36