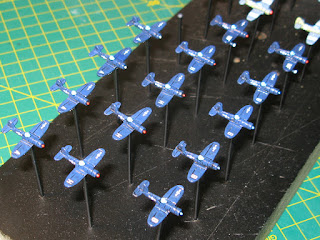 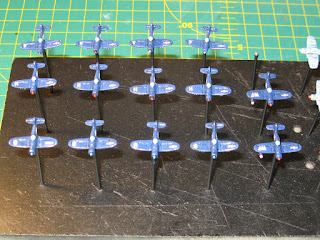 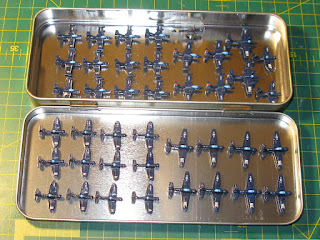 I managed to finish the decals on the F4U-4 and F4U-5N Corsairs this afternoon, although it was all a bit of a rush and not as comprehensive as I had planned. I realised that adding tail insignia would be a step toward the edge of madness, so I limited the markings to wings only. I also didn't add any engine cowling bands as I originally intended due to a lack of time. This meant that they ended up an bit 'vanilla' but at least they're now ready to deploy.

It's a shame that I had a few problems with white residue from the decals this time, which I haven't experienced before and which took some time to sort out, hence the rush to get these done and dusted. I also didn't mark up any aircraft from USMC units, which I had wanted to do, as these invariably had two squadron code letters, adding to fiddly alignment and cutting out. I guess I should do those Marine F3D Skynights to make up for it!
Posted by Jim Jackaman at 10:52