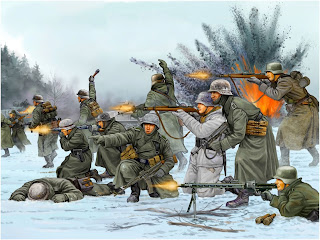 I've been thinking through some ideas for a clean up and base project that I can take on holiday next week. I've done this before, with mixed success, as it almost always ends up with a box of assembled and based figures or models, which then go back in a box and are never seen again! However, it's a useful wargamey thing to do and keeps me busy, when otherwise I'd just be sitting around enjoying the sunshine but achieving nothing at all. Nothing wrong with that but it's fun to have something to do in the evenings and I quite enjoy assembling and basing too.

This time, I'm going to base up a core platoon of late war winter equipped German infantry for Chain of Command, to use against my existing late war US platoon which I painted a long time ago for Bolt Action! The thinking behind this is that it will enable me to pay solo games with the figures I already have and will make use of the Cigar Box Battle snow cloth that I has been under-employed but for which I have some nice woodland and river terrain. I can easily add more terrain pieces to this including ruined buildings, roads and scatter, so it's killing two birds with one stone, so to speak. 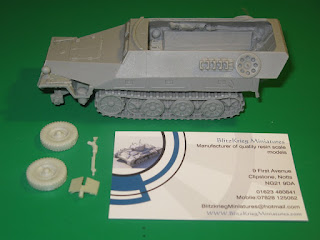 The figures are all Artizan Designs which I've had for ages, so I don't need to buy any new ones, and I also have a couple of Britzkrieg Miniatures resin half tracks to go with them. I have a PaK 40 too, so that's a good reason to assemble the Sdkfz 251 Hanomag as a tow, while the Sdkfz 250 that I also have will be a command or scout vehicle. However, I'm not going to repeat the mistake I made with my stalled Japanese platoon and glue together all the numerous support options under the sun, as this just put me off painting the buggers last time!
Posted by Jim Jackaman at 06:15