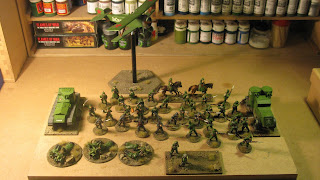 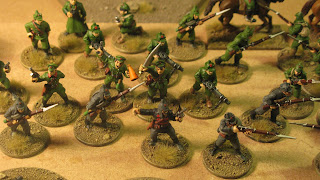 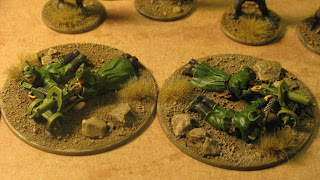 I painted my Bolshevik Army for the Back of Beyond way back in 2006, well before the arrival of grass tufts or other decorative basing materials, so they've been in dire need of some refurbishment for quite a while. This morning I used an entire pack of Gamers Grass Light Green tufts to tart up the bases on the infantry, vehicles and heavy weapons, leaving some of the figures as they were for contrast. The end result is much better than the original appearance I think, especially as it only took half an hour or so to complete the job.


I've also worked out my army composition for the game on Tuesday at the club. The opposition has declared a total of 881 points, so I was a bit worried that I might have to throw everything on the table to match this, but in the end it was quite straightforward to adapt one of my existing orbats to fit. I have actually managed to field exactly 881 points thanks to a bit of creative accounting and some upgrades, whilst still sticking to the restrictions in the army lists. I don't fancy my chances against the massed ranks of White cavalry but I think the Reds will still put up a good fight!
Posted by Jim Jackaman at 04:23