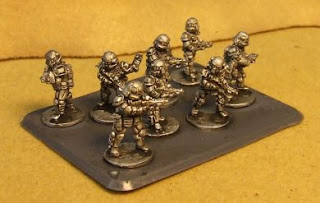 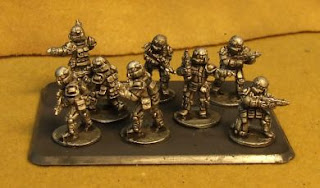 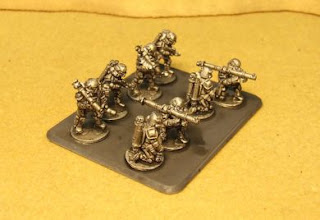 I took my son to the GZG stand at Warfare on Saturday as they very kindly provide a rummage box of sample figures that he always picks his favourites from as an extra treat.

This is such a great 'get kids into wargaming' thing for GZG to do that I decided to spend some pocket money with them, giving the sprog the choice of which army to go for.

He selected some US hard suit figures from the Tomorrows War range, although I liked the NSL Panzergrenadiers myself, so I bought a discounted set of ten packs which the very nice GZG chap put together on the spot.

These will be added to the 15mm stuff I have already got and may well get some armour support, perhaps from the Brigade Models South African range, as I already have three of their Rhino wheeled tanks as a primer.

As 15mm sci-fi was one of my projects for this year that just didn't happen, aside from a bit of assembly and undercoating, I'm going to put it at the top of the list for 2017 instead.
Posted by Jim Jackaman at 15:08