I played the follow on scenario to the Broadside and Ram INWarD 2018 game today, this time featuring a clash between French and Royal Navy ironclad squadrons to the South West of the Scillies. I was playing solo so left out the optional rules for shoals that I wrote into the scenario, as it would have been difficult to have a Fog of War element of surprise. However, the game was otherwise played out according to the outline I posted a couple of days ago, which was a simple encounter set up on a 4' x 3' table using my (embarrassingly) unpainted Tumbling Dice ironclads.

I'll write a proper after action report later but the outcome of the battle was a decisive, if not final, victory for the Royal Navy. Although the French ironclads got away at the end of the game by sailing off the edge of the table, two of the three were badly hammered with the Flandre damaged and on fire and the Provence crippled, so the honour of the Senior Service has been restored. The British ironclads only suffered minor scratches to the paintwork and some blast damage topside, with HMS Achilles taking some dents that can be easily repaired. 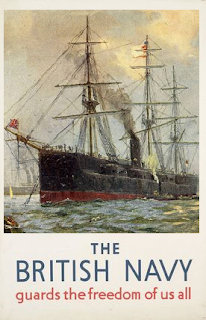 Anyway, the game did throw up some more queries about the rules, which I am thinking about and will need to resolve before the next scenario in the sequence. 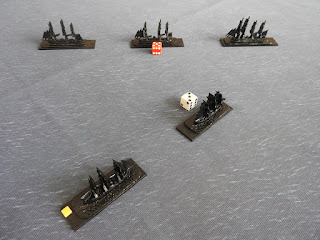 In the rules only one ship can be targeted by another but you can add a +1 support modifier if another ship is in range and arc of the target.

If I did, there would potentially be a lot more damage done to the target, which would give some far more dramatic results, not to mention spoiling the French naval commander's petit dejeuner.

I have based all my ship models on laser cut mdf bases but realised today that this could make arcs of fire more difficult to work out. I decided in today's game that the arcs of fire would be measured from the bows and stern of the model, not the actual base, although I may change to the latter approach in the future to make it obvious. This is nothing to do with the rules but is worth thinking about. 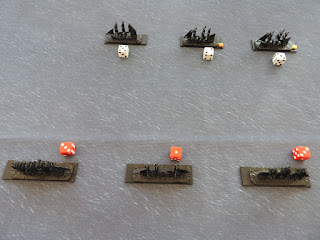 This one really bugged me today, as the crews of Flandre and Provence repeatedly negated Silenced and Crippled results by just spending the required repair AP's, of which they were not in short supply due to some nifty dice rolling. It may just have been 'lucky dice' but it did seem to be very easy to 'fix' badly damaged ships, so that the effects of gunfire in one turn were almost immediately cancelled out at the start of the next, much to the frustration of the British gunners.

Again, I may be getting the system wrong but it did make it much harder for the Royal Navy to make the all important 'knock out' blow. I did notice that the AP costs for repairs to Silenced and Crippled ships are higher in Broadside and Salvo, so I will probably bump them up by 1 AP per attempt, making it 3 AP and 4AP respectively. That should throw a spanner in the works, quite possibly in more than one sense. 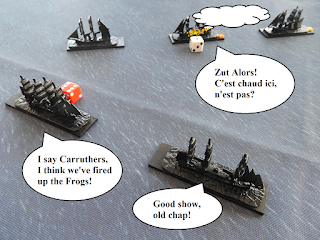 Flandre caught fire at one point during the battle due to a D6 roll of 1:6 whilst under broadside fire from HMS Monarch with HMS Achilles in support. This meant that a 2D6 roll had to made in each subsequent turn, with a 2-3 causing the damage level to go up by one and a 10-12 meaning that the fire was extinguished. There was also a -1 penalty to shooting but as the Flandre was also either Silenced or Crippled, this made no difference.

This is all fine but it did mean that the fire continued to rage for the rest of the game to no real effect, not being put out and not spreading any further to cause the damage level to go up.

I think I might change this to a different system, so that the chance of extinguishing the fire are greater but so too are the risks of it spreading further and bumping up the level of damage (Roll 1D6: 1-2 Fire Extinguished, 5-6 Fire Spreads (increase damage level by one). I also thought about a 1AP cost in the repair phase for each attempt to put out the fire. 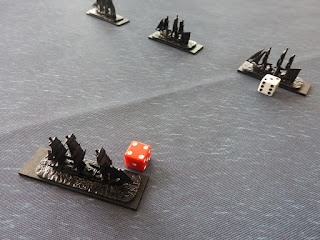 Any suggestions, corrections or criticisms of my ham fisted rules interpretation would be very warmly received.