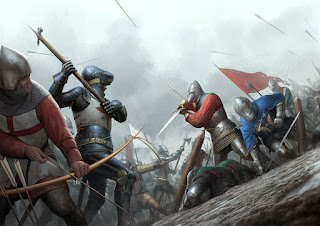 One of the regulars at the club has suggested a Lion Rampant project, using the Perry Miniatures late Hundred Years War range as the basis for some friendly skirmish games. He just happens to be French so would obviously be keen to base his retinue on the French range, while I have already had some plans way back in December to do an English retinue using the Men at Arms and Archers boxed set, as suggested by the author of the rules, Dan Mersey: 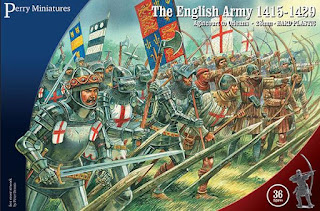 I don't know if anything will come of this but, as I already have the box of figures and some time to spend painting them in September, it may well be a worthwhile side line to explore. I have some naval and air wargaming projects lined up for the second half of the year but could squeeze this one in as well, assuming that there's enough interest in the Lion Rampant thing at the club? From initial feedback, it sounds as though they are more in favour of Dragon Rampant, which I am not really interested to be honest.
Posted by Jim Jackaman at 12:28