Ramming in Broadside and Ram

This was something that I really wanted to try out in the Broadside and Ram scenario that I devised for International Naval Wargaming Day. I had the Taureau as a test bed for the ramming rules and wanted to see how effective it would be against the Royal Navy ironclads, so worked out the following numbers using the formula in the rules and some logical thinking:


The Cruise (CS) and Maximum (MS) speed was based on the formula in the rules, so that was easy. The Attack Factor (AF) was worked out by comparison with other ships in the rulebook that had a small but powerful armament, in this case a 24cm M1864-M1866 barbette mounted rifle breech loader, so a rating or 2T seemed fair.

The T reflects the barbette mounting, which was not a turret but would have allowed fire forwards and to either side, but not in 360 degrees. I decided to not allow fire backwards along the length of the ship to keep things simple but, in retrospect, should really should only have allowed a 180 degree arc of fire forwards.

The rules give a -1 penalty for firing for turrets firing along the centreline but I'm pretty sure a barbette mounting wouldn't be able to do this anyway?

The armour rating was based on other armoured or ironclad ships of a similar standard and also reflected the fact that the hull was rounded, offering a very small target area. I wondered about knocking the DF down to 5 but, as the Taureau was operating independently for most of the scenario with a -1 DF penalty as a result, this didn't seem necessary.

As far as the ramming went, it seems that the jury is still out, with a failed attack against HMS Warrior due to rubbish dice rolling. I changed the rules to give specialised rams a 2D6 base roll for ramming instead of 1D6, as otherwise they wouldn't have any advantage despite their purpose built design. This worked well in practice, despite the poor result, so I think I'll keep it. 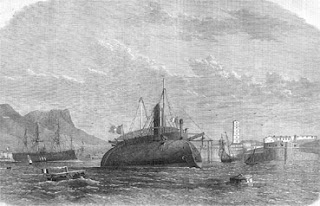 However, after the ram attack there were no rules for disengaging, which seemed a bit of an oversight. I may well add this as an AP option at the start of the subsequent turn, with 1 AP required by either ship to break free. This means that if neither side spends the AP the two ships will remain locked together, which would be a realistic outcome, the AP having to be spent to order the crew to cut the two vessels free, plug the hole and push away from the enemy.

I will pop these ideas off to David Manley and see if he thinks they are workable?
Posted by Jim Jackaman at 05:47