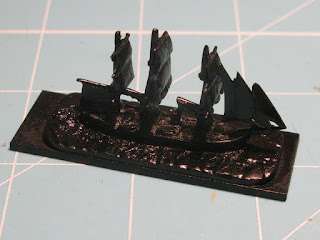 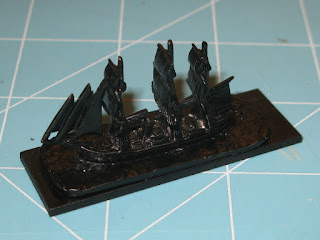 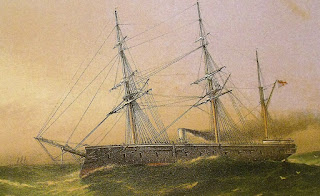 I'm back home now after the usual marathon journey. This morning, I was unpacking and sorting out the 1/2400th scale Tumbling Dice ironclads that I failed to paint over the holidays, when I found a spare model of Couronne that I seem to have acquired at some point. I thought I'd have a go at converting it into something else, as there was only one of the original, so did some comparisons and decided to make HMS Defence, or at least something a bit like her.

This involved cutting and sanding down the forecastle, re-profiling the stern and thinning out the funnel, with a minor adjustment to the rigging* to finish things off. It's the right size in terms of scale length and width but not exactly the same in terms of positioning of the funnel and the bow profile. I think it is fine, however, so I have now got an additional early ironclad warship to add to the British Channel Fleet.

*I have subsequently removed the sails from the mizzen mast, having noticed that it wasn't rigged in contemporary pictures.
Posted by Jim Jackaman at 06:13