I decided to wrap up a couple of half finished things today, one being the 1/600th scale Peruvian aircraft for my Target Locked On! Flashpoint:Alto Cenepa project, which have been hanging about for years, the other being the 1/600th Soviet Cold War PVO interceptors that I start on a few months ago. The Alto Cenepa planes have been sitting in a box since 2015, so I really should have finished painting then by now. 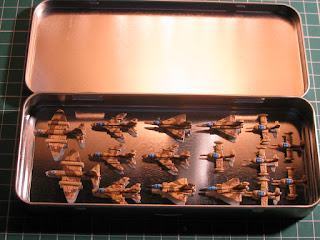 I did manage to finish the Peruvian aircraft this morning, although I had to simplify the insignia because all I had to use were Turkish roundels without fin flashes for the tails. I will now need to do the other half of the project at some point, by painting the planes for the Ecuadorian Air Force, again using magnet basing rather than my usual wire stands so that they match. Who knows where the decals will come from for those? 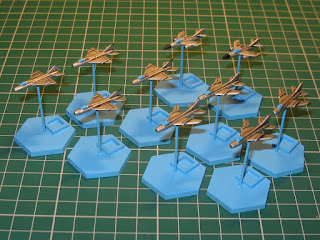 I didn't finish the Soviet planes, however, as I ran out of time to do the decals. I'll tackle these tomorrow morning, so that they are finished off properly. I am pleased with the bare metal finish on these, as I used a different approach from the one I used on my Korean War planes, with Foundry Metal rather than Spearpoint as the base layer. I think this looks better once it's been ink washed and highlighted.
Posted by Jim Jackaman at 11:38