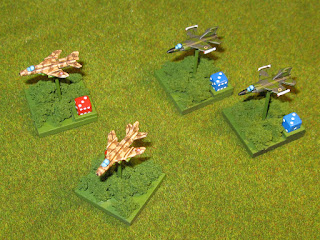 This is the scenario that I will, hopefully, be playing with Target Locked On! at some point over the week, having failed to get myself organised this weekend. The basic set up will be an Intercept mission, using the scenario guidelines in the rules but with the FAP fighter bombers starting on the centreline of the table and facing away from the attacking FAE Mirages. They will not be able to react until the FAE interceptors get a lock on, in order to replicate the lack of RWR and failure to detect the enemy until it was too late.

The Mirage will have two Matra Magic MkI AAM's and the Su-22's will have two AA-2 Atoll AAM's. The Mirage also get flares but the Su-22's will have to make do with just evasive manoeuvres. I won't include the FAP Mirage 2000's or the FAE Kfir C2's as they didn't play a role in the historical outcome of the engagement. I will rate all of the pilots as Experienced but using the adjusted ratings for Reaction and Skill that I've adopted for improved playability. The FAE points add up to 180 while the FAP points add up to 210, so on paper they have the edge, if not in the actual scenario itself. 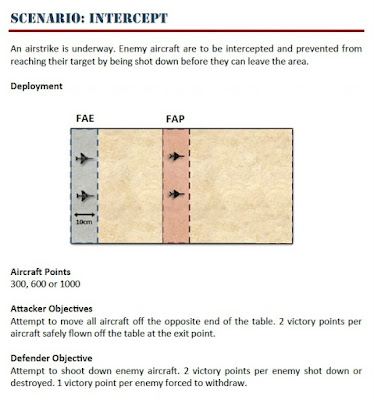 This time the FAE interceptors arrived in time to even make a few patrol turns before engaging; the difference to earlier events was that some of FAP fighters, probably Mirage 2000Ps, were flying high, thus exposing themselves to detection by FAE radars. Indeed, Maj. Banderas later stated to have had the first enemy fighter on his radar scope barely eight minutes after taking off.

The planes that his Cyrano IV radar detected were two FAP Su-22Ms, flown by Lt.Col. Victor Manuel Maldonado-Begaza and Maj. Enrique Caballero Orrego 'Poeta' of the FAP Escuadrón de Caza 111 'Los Tigres'. These cut the corner over the border, penetrating as deep as 16km into the Ecuadorian airspace before taking a course parallel to the boundary and then descending to a level of 600m above the ground in preparation for an attack against Tiwintza. 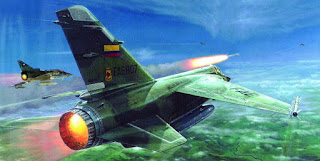 Banderas selected afterburner accelerating and turning so to bring his and the Mirage of his wingman to a deep six o'clock position behind the two Sukhois. While doing so, his RWR warned him that his aircraft was detected and tracked by the radar of an enemy fighter. At 13:15hrs, ignoring the warnings, Capt. Uscategui approached to the firing distance and launched one R.550 Magic, starting what was to become the first-ever air-to-air combat between two Mach 2 capable fighters in Latin American history.

His missile hit the Sukhoi flown by Lt.Col. Maldonado-Begaza, forcing him to eject before his fighter crashed into the jungle bellow. Meanwhile, Banderas scored a hit at Orrego's Su-22M as well, but the sturdy Sukhoi continued flying. In a hurry because of the warnings from his RWR, Banderas swiftly selected the second Magic and fired again, the missile this time cutting the Peruvian fighter in two, the wreckage falling to the ground. The two FAP-pilots never knew they were under attack: their fighters were not equipped with RWRs.


With their RWRs still screaming warnings of them being tracked by enemy fighters, the two victorious FAE Mirages descended deep over the jungle canopy and accelerated to supersonic speed, blasting away as they went. Neither Banderas nor Uscategui ever saw any of two FAP Mirages that obviously pursued them for almost 30 seconds, but they were not taking any chances.