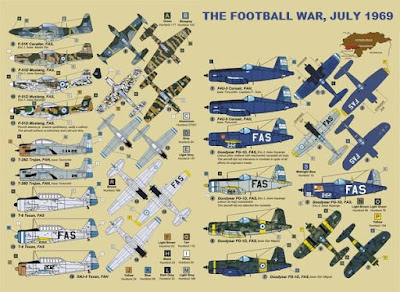 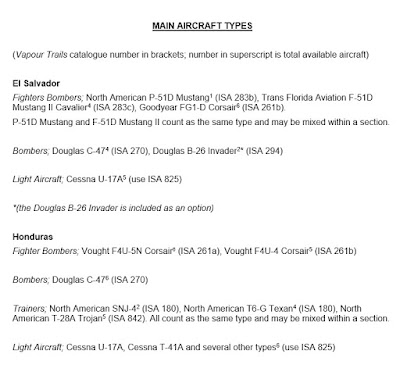 I've provided a break down of the different aircraft with matching Tumbling Dice Vapour Trails codes, for anyone who is interested in collecting forces for both sides in the Football War. I've also added a number in superscript for each of the aircraft types, to give some idea of the numbers available in the war itself, although this is a bit tentative as neither side kept detailed records and historians tend to disagree (a lot).

I've based the numbers on The 100 Hour War by Mario Overall and Dan Hagerdorn, which is my 'go to' source of information for this, as well as online articles and the Bag the Hun variant 'Anyone for Football?' by Tom Ballou in the 2007 Xmas Special. It's not often that you can assemble two complete air forces for an entire war for less than £20. I was even thinking of sending the rules and my notes off to Paul at Tumbling Dice to see if he'd put together a couple of Starter Packs?
Posted by Jim Jackaman at 09:25