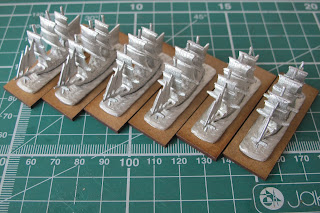 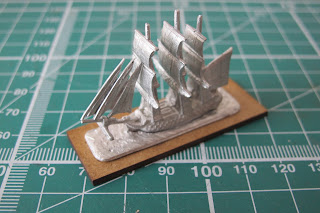 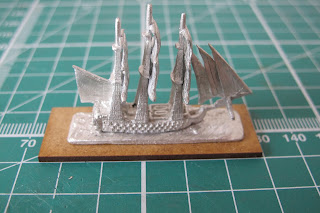 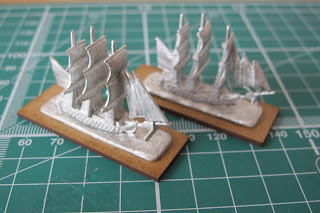 We've had relatives staying for the last couple of days, so I've only now been able to catch up with assembly of the Tumbling Dice 1/2400th scale Napoleonic ships. Here is the progress thus far, with six 74 gun third rates (ASN5) and a single 100 gun 1st rate (ASN3), although the latter will represent a single 110 gun three decker, probably the Terrible or the Républicain.

I've decided that I'll use this lot as the basis of my French fleet c1798, so the next instalment will be four or five 80 gun 2nd rates (ASN4) and a 120 (118) gun first rate (ASN2), before I move onto the frigates and unrated vessels. It's coming along nicely and I'm hoping to get the whole thing done by the end of next week, although I will have to add some filler to the bases and undercoat them when I get back home.
Posted by Jim Jackaman at 06:34