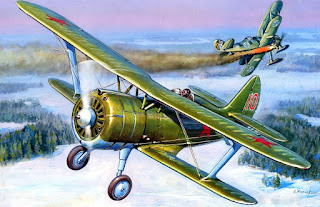 On the way over on the ferry, I had plenty of time to do some further research for potential Winter War scenarios for the Lard Day. I had another look on the excellent site of Hakan Gustavsson, which I've plundered several times before for scenario ideas:

This dogfight between Gloster Gladiators of LLv 26 and I-152's of 49 IAP stood out as a potential winner, although there were plenty more to choose from:


In the afternoon on 13 February, lentomestari Lauri Lautamäki (GL-253) and ylikersantti Oiva Tuominen (GL-255) were first scrambled at 14:00 and sent to Matkaselkä. After this there was an alarm - a large Russian bomber formation was approaching! Luutnantti Knut Kalmberg (GL-260) and Kivinen took off first as they were in readiness with running engines. Five others followed so all nine Gladiators of Kivinen's unit were airborne.

They met nine I-15bis fighters and engaged them. Six Russians tried to form a "Spanish ring"-defensive circle. Kalmberg attacked these Russians, but as he started shooting, three other Russians attacked him and hit his Gladiator. He tried to disengage by diving, but his plane went into a spin and dived into the ground at Havuvaara, killing him. Meanwhile, Kivinen’s Gladiator was hit in the engine. He disengaged with a steep dive and landed at Värtsilä.

The rest of the Gladiators were now dogfighting with the Russians. In the dogfight Jörn Ulrich was hit and wounded. He made a forced landing with the last of his strength between Kuhilasvaara and Havuvaara. His Gladiator GL-257 was badly damaged and not repaired anymore. In this fight, Ilmari Joensuu (GL-256) claimed one I-15bis at 14:40 while Ulrich was credited for the destruction of two between 14:15 and 15:05.

Other Finnish pilots in this engagement were Pentti Tevä and lentomestari Niilo ‘Arpinaama’ Artola. Artola was not a pilot of LLv 26 but a Blackburn Ripon pilot of LLv 16. He was on a familiarization flight with a Gladiator when the Soviet fighters appeared. He joined the battle although he was not sure how to operate the guns! However, he managed to fire a bust on an I-15 chasing a Finnish Gladiator. It seems that the I-15bis fighters were from 49 IAP, which lost Starshii Politruk M. A. Kochmala (I-15bis), who was KIA after claiming two Gladiators.

I think this would make an excellent, straightforward dogfight scenario, with plenty of aircraft to go round and lots of scope for pilot ability ratings, special scenario rules and clear objectives. I also have just enough 1/285th Gloster Gladiator models to cover it, with the I-15's sourced from Raiden Miniatures via Magsiter Militum in the UK. I'll have a go at writing it up in the usual style over the next few days.

Chocks away!
Posted by Jim Jackaman at 00:01