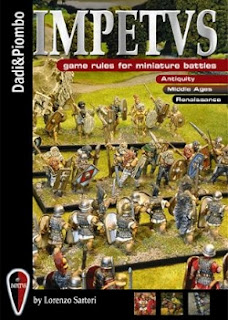 I've had a very cursory leaf through of the Impetus rules that I bought at Colours the other day and, I have to say, they look rather good. I'm particularly taken by the clarity of the rules and by the neat system of multiple basing, which enhances the look and feel of the figures really well. I know this is of little consequence in gaming terms but, for me, it's one of the things that makes a set of rules seem 'right'.

Anyway, I've been giving some thought to what I could do with them. One option would be to have another crack at the 10mm Norse that I acquired for the defunct Warmaster project, which is why I also picked up Extra Impetus 2 in the bundle, as it features a set of lists for the Year 1000.

The other option would be to tackle my stockpile of 15mm Peter Pig WOTR figures, of which I have an ample supply. These were destined for Bloody Barons but, as no one would  be interested in this at the club, the Impetus approach would seem a better bet.

I'm thinking of getting hold of Extra Impetus 3 which has a set of WOTR lists and a campaign system. At another £15 this is not a cheap option but it would give me a good idea of the permutations that my leadpile might stretch to, given a suitable window in the painting schedule to actually get them done.

I fear another doomed project is in the offing....
Posted by Jim Jackaman at 13:22