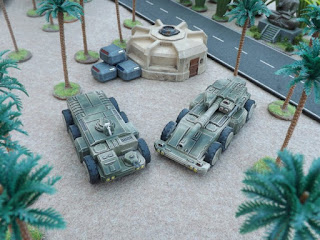 I forgot to get my annual Xmas Sale order in to Brigade Models until the very last minute this year but made it in the end. I decided to get three Wildebeest APC's, from the South African 15mm range, to use alongside the Rhino wheeled tanks I acquired the same time last year.


These have remained untouched since then but can now be used as the core of another 15mm force for Gruntz, perhaps alongside the GZG Tomorrows War U.S. figures I picked up at Warfare in November? I now have the gubbins for about four different sci-fi armies so really should get a couple painted in 2017!
Posted by Jim Jackaman at 12:31