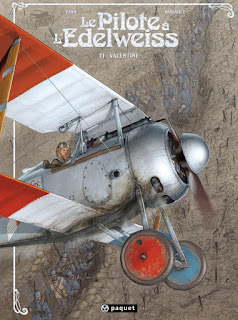 I've been meaning to acquire this series of graphic novels or BD as they are called here, for ages but put off doing so as I wanted to get the compendium version. I haven't been able to find one of these, so thought I'd just get the individual books instead. The mother in law was kind enough to give me the first volume as a stocking filler and the Mrs has bought me the rest of the books as an extra Xmas present, which was very nice of her.

I really like this artist, Romain Hugault, and have already got a copy of his previous WW2 three volume graphic novel, Le Grand Duc, which is fantastic. This series is set in the First World War and follows the story of a French pilot and his enigmatic German opponent, who flies an Albatros with a white edelweiss on the fuselage. 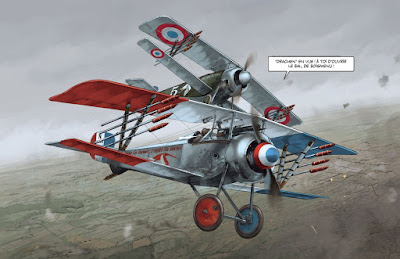 The artwork is amazing and the storyline is pretty good too. It's inspirational stuff and very apt, as I'm setting up a multiplayer game of Knights of the Sky for the end of January at the club. I'm also planning to revive my Wings of War gaming and have signed up on the Wings of Glory aerodrome forum to find out what I've been missing out on over the last couple of years.

(There will be more about my WoW/G revival over on my other blog, which is where I now post my board and card war gaming stuff)
Posted by Jim Jackaman at 04:38