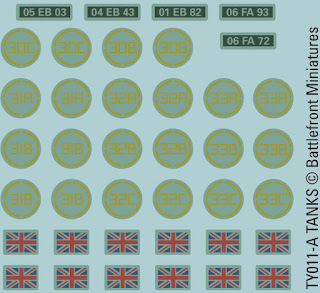 I had a really nice surprise when I opened the Team Yankee Iron Maiden bundle today. The rules supplement was as expected, perhaps better than I thought it would be, full of some really good information, scenario ideas and painting guidelines for Cold War British armour and infantry. I'm not into Team Yankee but thought that it was a really useful resource regardless of the rules of scale of gaming that you might decide to use. 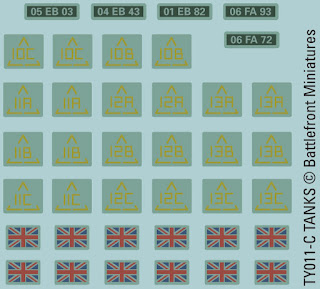 The Mechanised Company pack of British infantry figures were also pretty good, although not as well sculpted as Peter Pig in my opinion, being the usual Flames of War style castings which I find a bit soulless. However, there's just enough for a full platoon at 1:1 if I wanted to use them for Fireteam: Modern or No End in Sight.

The surprise was to find several sheets of 1/100 scale BAOR decals, both for AFV's and helicopters, which I can only assume were leftovers from an abandoned project but which are perfect for my Britain's Small Wars vehicles including the QRF Saladins, Saracens and Ferrets that I have assembled.

It's always nice to get an unexpected extra and this one will be really handy!
Posted by Jim Jackaman at 14:40