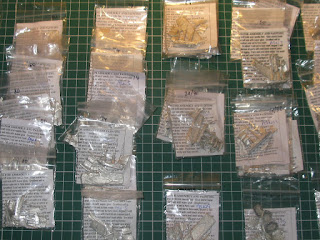 I've been very busy of late, both with work and weekend activities, so wargaming has been shoved aside and little has been achieved at the workbench. However, I have started to assemble the various components of my summer holiday projects, the first being Napoleonic Naval fleets in 1/2400th scale using Tumbling Dice miniatures.

The plan, as usual, will not be to paint anything but to glue together and base enough model ships for two small fleets or squadrons, one British and the other French, although I might add a few Spanish or Danish ships to the production line as well. After digging out the models from the lead pile, I have done an inventory of the various packs and have more than enough to begin with:

Blimey! I have ordered a few more 100 gun three deckers and 74's to bulk out the ships of the line and another pack of bomb vessels, as three seemed a bit lightweight even if they won't be used very often. I have also ordered a 130 gun first rate as it's about the only model I haven't got in the box and it just had to be included in the scheme of things. I think that's more then enough for a rainy day or when it's just too hot to venture outside.

How many of these I actually assemble and base remains to be seen but the beauty of naval wargaming is that I could quite happily just have two frigates and still enjoy a decent game, depending on the rules I use and the scenario. The advantage of 1/2400th scale is that it's a lot cheaper, quicker to paint than 1/1200th scale and I don't have to fiddle around with scary rigging either!
Posted by Jim Jackaman at 07:03