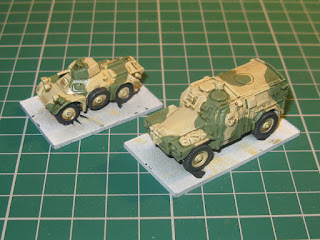 I've been heavily bogged down with DIY today, so only managed to squeeze in about half an hour at the workbench, during which I painted the tyres on the British AFV's and then dis a little bit of highlighting over the ink wash. I have discovered what will now be my 'go to' shade for tyres, however, which is Vallejo 70995 German Grey. It's spot on for that faded rubber look and will be even better after a drybrush to weather it in. The QRF models have fairly ropey tyres to start with, which makes it difficult to paint them accurately but I think they look okay. If I can find the time, I'll do a bit more on these vehicles tomorrow including the stowage, headlights and so on.
Posted by Jim Jackaman at 14:13