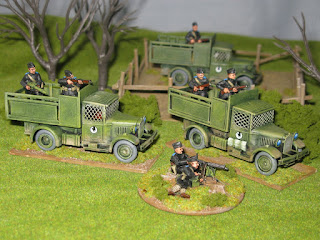 It's not often I'm sad to see the back of some fascists (!) but the BUF and their Red Worker opposition have now been sold and are on their way to a new home in South Wales. I hope that their new owner enjoys them and gets them into action as soon as possible, as they've been sitting in a KR storage box for at least a decade with nothing much to do. To give him some encouragement, I've bunged in some extra unpainted figures to boost the ranks of the proletariat, so that he can field another unit of infantry to put the boot into Mosely's malevolent mob!
Posted by Jim Jackaman at 12:04