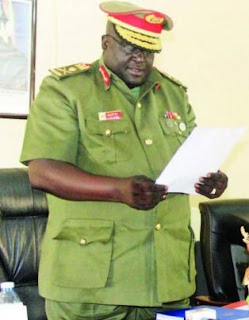 From our MBC correspondent in Mpongoville

After protracted diplomatic negotiations the former President of the Democratic Republic of Mbote, General Papi Mpongo, has been reinstated as leader of the nation, with the full backing of the Mbote Defence Force and People's Volunteer Army militia. In an official ceremony at the presidential palace, General Mpongo, was sworn in as head of state by the acting leader of the government, Dr Phat Whalet, Minister of Finance. In honour of President Mpongo's return from exile, a military parade by elite units of the MDF led by the Presidential Guard has been held in the capital.