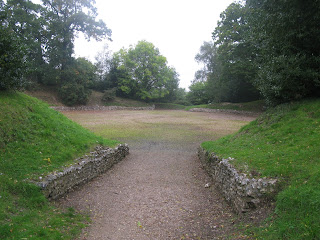 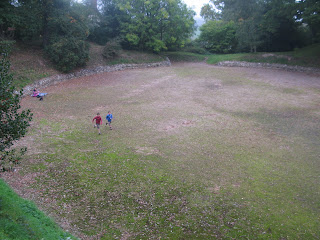 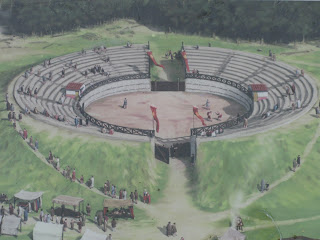 I persuaded the wife that it would be a nice idea to visit Silchester today, rather then go down to the New Forest with the rest of the weekending horde. She was a bit dubious but it turned out to be a great day out, depsite the less than tropical weather.

I've meant to visit the place for years, as it's only half an hour away, but somehow never got round to it. In my distant youth I was an archaeology student and I even attempted to make a living out of it before I saw reason and joined the teaching profession, so it was a bit of a busman's holiday for me.

The kids loved it too, especially the amphitheatre which really captured their imagination, despite the alternative distractions of acorn throwing and running about in circles. It's a very impressive site even though on a provincial scale compared with the one I visited in Trier many years ago.

It got me thinking about the 28mm gladiators that I found the other day mixed up with the various pirate figures that I've just painted up. I really should do a gladiator project, as the Crusader figures are really well sculpted and full of character. If only I had the time...
Posted by Jim Jackaman at 12:26