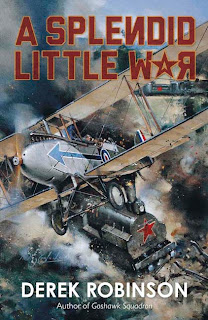 I finished reading A Splendid Little War on the Kindle HD today and it was rather good, much to my surprise. I don't read fiction as a rule, prefering military history over historical stories, as they tend to be less than realistic and often feature ridiculous storylines. Anyway, I enjoyed this one and will be downloading some more of the series. I've been interested in the Russian Civil War for many years and also the First World War in the air, so this story was an excellent combination.

I've had a few passing thoughts about wargaming the RCW air war too. I have several 1/72nd WW1 aircraft that I built for use with the excellent club hex based rules, Knights of the Sky, including a handful of Imperial Russian Nieuports and a lone Anatra Anasal. I could easily add some Soviet fighters to this but, as most people seem to use 1/144th scale these days, that would probably be a better option. However, this is all rather unlikely at the moment, unless I get an unexpected urge to 'bash some Bolos'. 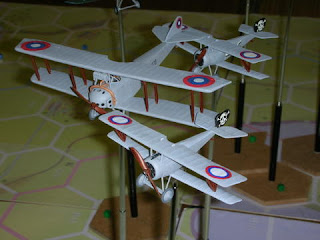 The Kindle turned out to be a great way to transport books on holiday, without lugging around hefty hardbacks that always get bashed and biffed in the process. I'm going to take the Kindle instead of books in the future, as it's ideal for reading through .pdf rules and supplements, as well as background research for my various on-going projects. Not that I'm going to stop collecting and reading books, having just bought four second hand books today!
Posted by Jim Jackaman at 08:08

Labels: Books, Knights of the Sky