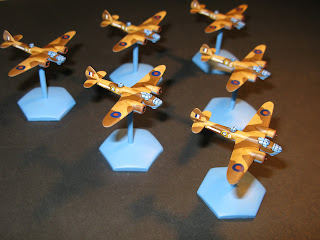 I've got four players signed up for the BTH2 game which I'm going to planning to run at the club in a month or so. As a result, I need to get cracking on the scenario development. The site that I've been culling information from is really useful and packed with the sort of historical detail that makes all the difference when writing realistic scenarios:

I'd usually try to find at least two other sources to cross reference the information against but, in this case, the job has been done for me. Excellent!

Anyway, to save you the hassle of reading it all for yourself, here's the RAF version of events, which has enough to set up the parameters for the game with the other details filled in from the Italian reports and a bit of educated guesswork.

Sgt. Broome attacked the same vessel and hit it aft and left the vessel in flames with grey smoke pouring from it. He was chased by the escort plane which did not get within firing range. Sgt. Harrison saw Sgt. Routh attack the small Cargo boat, set it on fire and then crash into the sea having been hit by guns from the large m/v.

Sgt. Leven, Sgt. Baker and Sgt. Hopkinson did not make an attack and brought back their bombs. Four aircraft returned safely, but it is not thought that there could be any survivors from the two aircraft shot down. The crews of the aircraft were as follows:

The only questions that I need answers for are as follows:

2. What was the twin engined monoplane? - it won't be part of the scenario but I'd like to know.

3. What was the formation? - it's two flights of three but in what formation for each flight?

I think the Italian after action report will fill in some of the details but the rest will have to be improvised.

RIP all of the aircrew who lost their lives, brave men indeed.
Posted by Jim Jackaman at 12:15