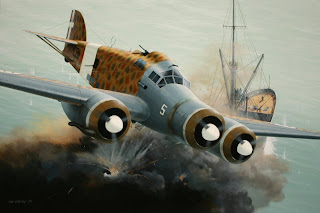 I've had a bit of a re-think on the Bag The Hun campaign front, since my initial post back in February. I was intending to use the Finest Hour campaign supplement off the shelf, painting up a squadron of Spitfire MkI's specifically for the purpose. These would represent the machines of No609 Squadron based at nearby Middle Wallop in  June-July 1940.

However, I've now decided to adapt the campaign system to Malta in late 1941, making use of my more extensive collection of planes and basing the action around No185 Sqaudron, as featured in the various scenarios that I've written for the club. This is a much easier option, saving me some valuable time in preparing and painting more aircraft.

However, I will eventually need to paint up some bombers for the Italians, as they're pretty much central to the campaign. I have twelve lovely Museum Miniatures SM79's in the stockpile, so there's no extra expense required. They'd be quicker to paint than the Spitfires too, given the lack of specific camouflage patterns and the relatively simple three tone sand/brown/green camouflage finish that they will feature. 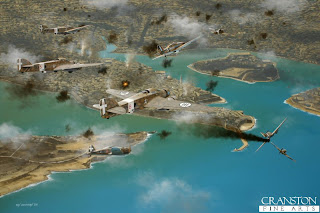 They'll be painted up as bombers rather than torpedo armed aircraft, although I may use them for both roles in the long term. I've also already based up and undercoated three Museum Miniatures Cant Z1007's, which I can paint up as night bombers in a simple overall dark green / black finish, although they may also get the three tone camouflage of the Sparviero's.

This will all have to wait a few weeks though, as I have the coastal forces to finish and the Bolt Action Yanks to start. I'm planning to start the basing on the US infantry later today, once I've been to the supermarket to get some suplerglue (I forgot to pack any in the box). The overall plan is to finish them by the end of April, leaving the coastal forces high and dry for the moment.