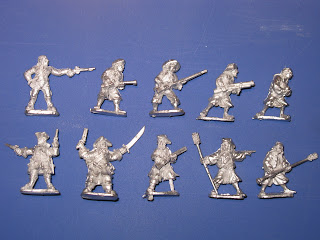 We had a cracking day at Colours and, as expected, I came away with more than I bargained for. I had planned to get a few 28mm Foundry pirates from Dave Thomas, which I did thanks to his £1 a figure set up, allowing me to pick out ten very nice swashbuckling figures from the box of loose minis that he brought along.

I thought this was a great innovation and much better than having to buy the usual blister packs. I also picked up a copy of Go Strong Into the Desert from the stand and a pack of Foundry African Flesh paint, with a discount of £2.50 thanks to Dave rounding things down. It's not the first time he's done this for me either. What a nice chap he is!

I went up to the Minimi stand to get a 28mm pirate ship but they'd sold out by lunchtime, so that was a bit of a dead end. I reckon I can scratchbuild one anyway. On the plus side, I bought a couple of 15mm pirate ship hulls from the chap at The Square, to use with the Peter Pig figures I already have, although who knows when or for what. They were only £2.50 each (!) so I couldn't resist. Apparently, they're the old Wargames Illustrated ones, minus the masts and rigging, according to the thoroughly decent chap who sold them to me for peanuts.

Another bargain was found at the excellent Pendraken stand, which I make a point of buying from at every show I get to, just for the hell of it. I picked up two 10mm Italian WW2 battlepacks for an overall saving of about £10, once postage is included. I'd had my eye on the Pendraken Italian BKC packs for ages but had put off buying them as they aren't cheap.

However, the two I got today were old show stock and were therefore significantly underpriced. So, I used a little of the money I saved to buy some resin North African buildings in 10mm from The Square, so that the Italians have somewhere to retreat to.

Finally, I got a couple of 1/600th scale Hammerin' Iron ships from Peter Pig, another one of my habitual purchasing stops and always worth a look, even if you don't 'need' to acquire any new metal (I'm one of their 'best customers' apparently, which is a bit worrying). I know the Hammerin' Iron models are not as nice as the Thoroughbred ships but they're very reasonable price wise and look good too.

The boys also got some toys in the form of £5 worth of quite well painted 40K space marines from a second hand trader on the second floor. It took a while to convince them that this was a good deal but they went home happy in the end. All in all, a very successful and not too expensive day out.

I'll post some photos and details of the various demo and participation games tomorrow, with particular reference to a very nicely done 28mm Lost World game run by the Abingdon club.
Posted by Jim Jackaman at 13:17