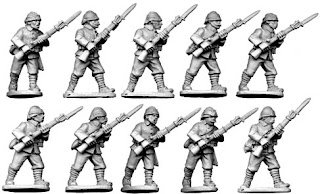 I didn't manage to finish the armoured train tender last night as I had to babysit the sprog. However, it's only going to need a few bits and pieces to round it off, so I may get a chance to do some more to it this evening. I did start on a flat wagon, however, by dis-assembling a carriage, gluing up the wheels and screwing a piece of wood onto the chassis to act as a central support for the flatbed.
On a different but related thing, I also added a couple of packs of Copplestone WW1 Turkish infantry from ebay to some existing figures that I bought at a show a couple of years ago in a discount bin. I now have enough to kit out a small but quite powerful expeditionary force to the Back of Beyond. This would consist of a two or three infantry units, a machine gun and a field gun plus a commander.

Think about this tilted in a vertical direction and you'll get the general idea.
I could add a AA gun if I used the spare Maxim from the machine gun pack and mounted it on one leg from the tripod rather than three. I have a few spare Chinese crew from my other Back of Beyond army that could be headswapped to create the AA gunners, which would be an easy way to add some much needed ani-aircraft firepower. 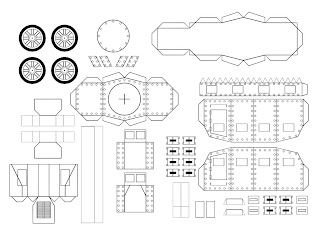 I'll also need to do some headswaps and converting to make the field gun crew. I already have a 1/48th scale Smer Albatros DIII kit or an Aurora Albatros CIII two seater kit to use as air support. I'm also thinking of scratchbuilding a Bussing or Ehrhardt armoured car out of lego blocks, plastic card and washers for the wheels. I have a card model plan as a template, so it can't be that hard compared to the armoured train!
Posted by Jim Jackaman at 02:08