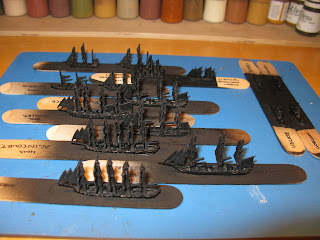 It's a couple of days before we're off to France for the Easter holidays, so I've been thinking about what I'm going to take with me for painting up. In the past, I've taken figures to clean up and base but all this leads to is yet more boxes of figures to be painted up, rather than anything actually being painted.
This time round, I've decided to do some painting instead, although this throws up all sorts of logistical problems in itself. To keep the number of paints down to a manageable quantity and to ensure I finish what I start, I've decided to take a couple of half completed or prepared projects with me to get wrapped up.
The first is the 1/2400th scale Victorian Ironclads that I prepared during activity week last year. I have a varied selection of British and French vessels assembled and undercoated, which only require a handful of paints to be tackled effectively. I'll also take Iron and Fire and Floating Castles with me, so that I can get some practice games in with the finished models. Neat, eh? 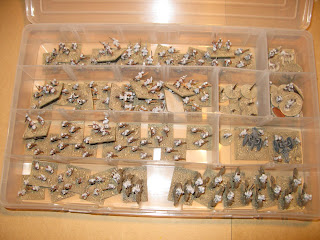 The second is the 15mm Dervish army for PITS that I have almost finished but which has been stuk in a box for a couple of years. This also needs only a handful of paints to complete and will be easy to transport. If I get it done, it will open up the possibility of an Anglo Egyptian army some time later this year. Good stuff!

For the moment, the Rapid Fire! project and Red Armoured Train are on hold but I'll be getting back to them after the holidays. I'm also going to start on the Iron Cow stuff as a mini-project in the extra bank holiday time that we've been given in May, so there's plenty to be looking forward to in the next month or two.
Posted by Jim Jackaman at 02:20