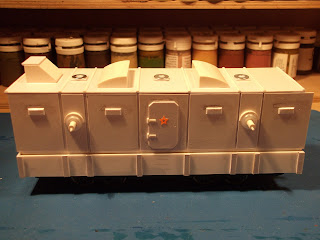 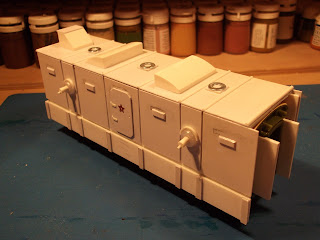 My two sons have been packed off to the French Mother in Law for a week, so we only have my daughter to look after at the moment. This means I have a lot more time for modelling and gaming for a change. As a result, I've been able to push ahead with the command / machine gun wagon this evening, although I have to add some further bits before it's ready for an undercoat.
I added some semi-circular bits to the tops of the machine gun ball mountings made out of a sliced up ball point pen. The machine gun barrels were sliced from bits of  lego and then plastic rod muzzles were glued into pre-drilled holes in the ends. I also added vision slots along the sides of the wagon with plastic card.
I then added a door to the centre section and a couple of protective armour plates to the connecting corridor thing on the end of the carriage. After that, I added a roof and the various bits and bobs on top. I decided to keep it simple so only glued on one wedge shaped cupola plus a couple of lego pieces to act as some sort of fume extractor or ventilation thingy.
I need to detail the ends and the other side of the carriage tomorrow, then add the rungs and grabhandles in order to finish it off. I can then start on the daunting task of armoured locomotive construction.
Posted by Jim Jackaman at 13:42