The Rules With No Name 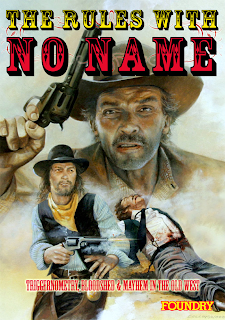 I spotted a couple of really good half price deals on TRWNN over on the Foundry website yesterday, with the rulebook bundled together with two to four packs of figures. I already have the rules but thought some of the chaps at the club would be interested. A few of us have posses for Legends of the Old West already, I have Mexican outlaws and Lawmen, for example: 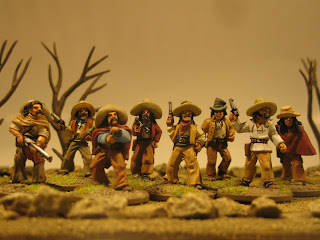 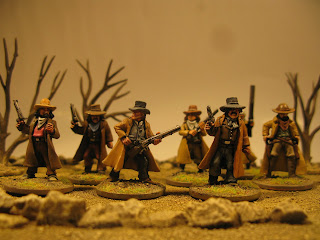 Some of the others have been interested in getting into Wild West gaming, being put off by the GW rules up to now. A game is on the cards for sometime later in May, with a couple of the usual suspects getting the rules now that they're on special offer.
I quite like the look of TRWNN, especially the one on one gunfighting focus and the card based turn sequence. It's also got me thinking about another small posse of figures, which is most likely to be some cowboys, as I have a few nice Foundry figures that would be ideal. It'll re-invigorate an old project and give me something quick and easy to turn around.
Posted by Jim Jackaman at 01:50