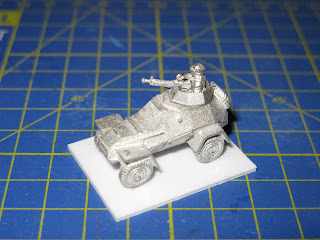 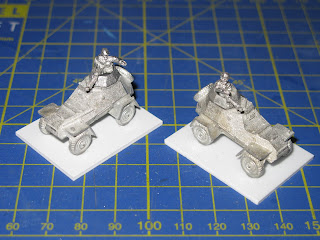 These are the Skytrex BA64 armoured cars that I put together a couple of days ago. They were originally equipped with tiny LMG's which looked completely out of scale, so I removed them and replaced them with barrels from Peter Pig Soviet HMG's. I also cut down a couple of figures to use as crew.


I've had a re-think about the Professional unit for the Ltumtu army and will be using the helmet figures as originally planned. They'll be supported by a couple of T55's and be transported in BTR60's. I'll also have the option of having them helicoptered into battle once I build the 1/100th scale VEB Mil Mi4's that I have stockpiled at home.
Posted by Jim Jackaman at 13:45