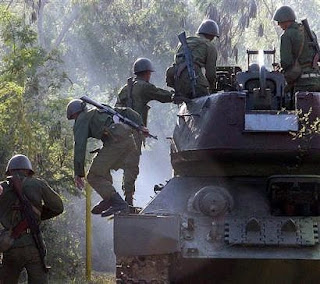 I'm debating what do do for the armoured unit in the Ltumtu army. I was going to use four T55's but I'm conscious that 'mission creep' is starting to upgrade the Ltumtu armed forces into a bit of regional superpower, so two might be more manageable.

On the other hand, I have two T34/85's and a single SU122 that were destined for a Militia unit but, as no militia can have tanks in a Dictatorship army, they're now army surplus. I really like the retro 'old tank' look of the SU122 in particular and it would fit well with the Cuban style uniforms of the regulars, so I may use them instead of the T55's.


There's very little difference in points terms, old tanks being 54 points and standard tanks 60, assuming they both have Regular status. Whatever I didn't use would be recycled into another unit or army later, so there's no loss either way. I could even make a Professional tank unit out of the T55's...mission creep again!


I've also been wondering about the last of the 76mm AT guns and have a cunning plan. As I used the heavy mortars on the BTR152's the other day, I now need a heavy weopon of some sort for one of the Militia truck technicals. I tried out one of the assembled AT guns in the back of a truck and it's a perfect fit, so I'm now going to make a 76mm AT portee!