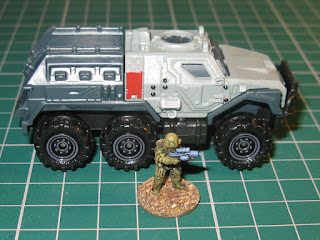 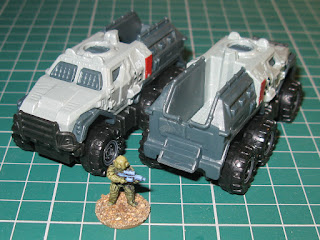 I was in town this afternoon and popped into the local toy shop to see if I could find any Humbrol Grass Green spray paint. I was unlucky but did spot some Matchbox Jurassic World diecast toy vehicles including this very hard sci-fi looking Armoured Action Truck. I bought a couple as wheeled transports for use with my overloaded lead pile of GZG figures, as they are considerably cheaper than the resin or metal alternative. Here's one with a badly painted 15mm GZG Tomorrow's War Brazilian armoured trooper alongside for a scale comparison. That's yet another project that I really should crack on and finish, although I'm tempted just to start a new army rather than slog through the one that I've almost completed!
Posted by Jim Jackaman at 20:19