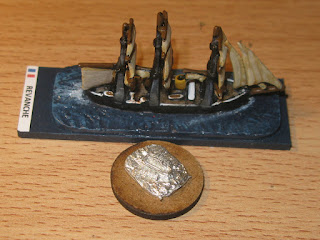 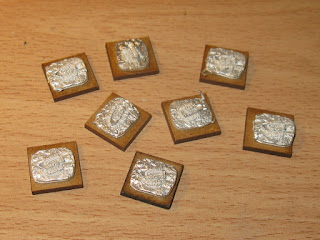 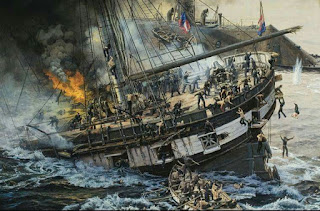 I realised the other day that, aside from a fourth shell splash marker, I had nothing to indicate when a ship was Shattered in Broadside and Ram, or in other words, when it was in the process of actually sinking. I thought it would be a nice touch to have some sort of specific marker for this, so considered chopping up a couple of models to make sinking ships and floating flotsam. While I may still do this, it would actually be quite an expensive way to go about it and would also mean a fair bit of modelling and painting, so I had an idea for something less time consuming.

There is a pack of ships boats (ASN15) in the Napoleonic range which includes bases with twin longboats and single longboats, of which I just happened to have a set. I picked out the single boat bases and will glue them to 2mm laser cut mdf circles or squares, then paint them up as markers, with additional use for cutting out or amphibious landing scenarios. In their primary role, however, they will make excellent 'abandon ship' markers that I can place next to a sinking ship rather than just adding a fourth shell splash. I quite like this idea and it won't take so long to do!
Posted by Jim Jackaman at 11:10