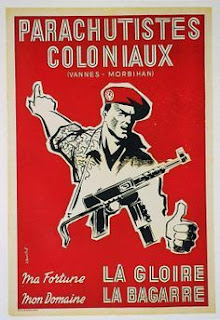 I've been enjoying the after action reports over on Just Jack's excellent blog, where he's been playing out yet more episodes of his ongoing Cuba Libre! imaginations campaign. He is currently using 10mm figures for platoon level skirmish games on a 2'x3' board, with Fivecore Company Command as the rules. These game reports are really slick and full of tactical action but don't require much set up, which is brilliant.


I've thought about something similar a couple of years ago, but for French Indochina using the Pendraken 10mm range for the French and Viet Minh. I even worked out some orbats before wandering off on my 15mm Sandbox Skirmish project, which is now a bit stuck (I need to dig that out of its rut too!) At the same time, I did also play around with 15mm skirmish as well but with the No End in Sight rules and the Eureka Miniatures figures.


I am now in a mind to revive the 10mm idea but would need to devise some decent terrain and some sort of cloth or board, which was the original sticking point for this project. It doesn't need much in the way of scenery but it does need to actually look really good for the same reason. I've also been inspired by Tim's cracking 10mm Men of Company B project over on the eponymous Tim's Tanks blog, so if he can do it so can I.

https://timstanks.blogspot.com/search/label/Menof%20Company%20B
Posted by Jim Jackaman at 11:45