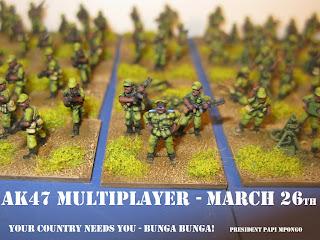 I spent over eight hours watching my two boys at the county Judo championships today, most of which was spent waiting for them to be floored by their opponents after a few seconds of furious pushing and shoving. I was very pleased when the eldest won a bronze medal and when the youngest won a couple of bouts against much older and more experienced kids. Not bad at all.

Nonetheless, I've had no time for the coastal forces project today although I'm planning to finish off the last of the new boats tomorrow, after I've taken the lesser sprog to rugby training. I doubt I'll get them painted up in the next couple of weeks, so they'll probably be taken on holiday immediately afterwards for completion. They only need a handful of grey, blue, white and light green shades so it shouldn't be hard. 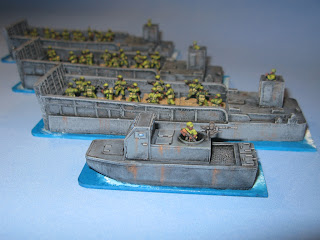 To make up for my lack of activity of late, I've decided to run an AK47 multiplayer game at the club in the last week before the holidays, using my colonial settlers and dictatorship army for the factions. The previous game went down well, so I'm hoping that I'll get two players a side for the follow up. I'll be using the amphibious units to make the game a little different and may even try to scratchbuild some extra terrain..